College Hoops
2:00 PM EST
Rotation #547-548
Vanderbilt +3.5 over Florida (3u)
This Vanderbilt team has been on fire winning 7 of their last 10 and going 8-2 ATS in the process. This is a very talented team who was leading for the majority of their last game against Kentucky until they had a huge second half comeback. This is Senior Day for Vandy and a win in this game would guarantee them a bid to the tournament so you know we will be getting their best here. Vandy matches up well against Florida as we saw earlier in the season when they beat them in their house. The Commodore’s have the best homecourt advantage in the SEC which will be rocking today with it being Senior Day. This is my top play of the day, I love Vandy to win this game outright but we will take the 3.5 points of cushion just just to be safe in case this comes down to foul shots at the end. Take Vanderbilt.

College Hoops
4:30 PM EST
Rotation #593-594
Wake Forest +1.5 over Virginia Tech (2u)
I love how this Wake Forest team has come around and we just backed them in their huge win over Louisville and I love them again in this spot here today. I’m not worried about this being a let down spot because Wake Forest is a bubble team and needs this game to get into the NCAA Tournament.  John Collins for the Demon Deacons has been the most improved player in the country this season and should have another huge game in this one. Virginia Tech has been shooting lights out from 3 at home during their win streak but if they don’t shoot at 50%+ from down town they are going to be in trouble today. If you haven’t watched Wake game’s this year you probably never heard of Collins but this guy is the real deal and I think he wills his team to victory here today and get’s them a spot in the Big Dance. Take Wake Forest.

College Hoops
6:00 PM EST
Rotation #593-594
Oklahoma State +1.5 over Kansas (2u)
This Oklahoma State team is another team who has been on a roll over the past month going 8-2 straight up and against the spread in their past 10. Kansas has been solid as well going 9-1 over their past 10 but have only covered the spread in 4 of those games. The difference in this one is the Jayhawks have already locked up the Big 12 regular season championship so don’t have much to play for here as they are almost guaranteed to be a #1 seed in the tournament. This is Senior Night for Oklahoma State and they desperately need a big win for their resume to increase their chances for an at-large bid into the tourney. Love backing the home team in these kind of spots and like Oklahoma State to win this one for the home crowd tonight. Take Oklahoma State.

NBA
6:05 PM EST
Rotation #501-502
Pistons -5 over Sixers (2u)
The Sixers continue to be a team who grinds out wins despite having a weak roster but playing on back to back against the rested Pistons will be too much tonight. The Pistons are still fighting for the final playoff spot in the Eastern Conference while Philadelphia is stuck looking ahead to next season. Drummond has the big edge and as long as he doesn’t struggle massively from the free throw line at the end of the game again I like the Pistons to win this one pretty comfortably. Take the Pistons.

College Hoops
8:00 PM EST
Rotation #593-594
North Carolina -6 (-125) over Duke (2u)
This is a lot of points to lay in a huge rivalry game like this but I do like North Carolina to win this game by double digits by the time it’s said and done. They have been a machine at home and Duke has really struggled on the road. This UNC team looked poised to make a serious run to win it all this year and their little hiccup against Virginia last week doesn’t bother me. They have a chance to lock up the ACC Title with a win over their hated rival in a big revenge game and I think they do just that. I rarely do this but 6 is a key number so it’s worth buying it down from 6.5 to 6 for the extra juice to be safe even though it’s unlikely it matters. Take North Carolina.

NBA
8:05 PM EST
Rotation #503-504
Heat -2 over Cavs (2u)
This is just a horrible spot for the Cavs and these are the kind of games they typically mail in. It’s the end of a long road stretch coming off two emotionally draining games and a few guys are nicked up. This is also one of those weird home home spots where they play each other back to back on each other’s courts and I see this one being a split just like it was the with Raptors and Wizards. The Heat are a weird team who usually get up to play against top competition (already knocked off the Warriors at home) and I think they get the big home win over the Champs here tonight. Take the Heat.

NBA
8:05 PM EST
Rotation #505-506
Bucks +1 over Raptors (2u)
The Raptors looked great in their win over the Wizards but playing the second night of a back-to-back game on the road is always a tough ask. With that being said, I think the Bucks continue to ride the momentum they have after the win last night and take advantage of the Raptors who are shorthanded, have no answer for the Greek Freak and who have had their troubles covering on the road. Take the Bucks.

NBA
8:05 PM EST
Rotation #509-510
Spurs -8 over Timberwolves (3u)
This is a great spot for the Spurs who despite being on a back to back are well rested because of how Pop has been working the rotation. They played far from their best ball last night and were still able to squeak past the Pelicans. The Timberwolves have been playing great but it’s a big step up in class tonight. Minnesota has the edge with Townsbut the Spurs have the edge everywhere else. Look for Leonard and Aldridge to lead the Spurs to a pretty easy double digit win tonight. Take the Spurs. 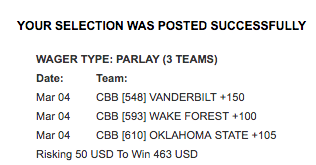