What a fun first half of the season that was in the NBA from October through the All-Star break!

I appreciate everyone who followed me for the first half of the season, but to be honest that is the weakest part of the NBA season to bet.

After the break when playoffs and playoff seeding starts being at stake the level of play starts ramping up and so does our opportunity to start really making money off the NBA.

Many people know me for the NFL but I have always said that NBA is actually the easiest sport to bet and profit with by far.

I’ve been betting NBA for years but only started documenting my picks on Twitter starting last season. I know lots who will be reading this followed last year as well, but for those who didn’t it was a pretty epic year!

The year finished +136 units including an unprecedented run of +77 units in the playoffs alone. And that doesn’t include all of the futures we had on the Cavs to win the championship that we were on since the beginning of April at 4:1 odds.

The NBA Finals is easily the best series in sports to make a ton of money on and we did exactly that last year when we re-invested in the Cavs at +325 before the finals started and of course the epic call to double down when they were down 3-1 at 10 to 1 odds!

That was an unforgettable playoffs and finals where we all made BANK but enough about last year.

So far this year NBA is well on pace to match or most likely exceed last years numbers of 130 units. I’m doing things slightly different this year by sticking to a disciplined 1-3 unit scale as opposed to last year which included 5 and 10 unit plays. Slow and steady is the key to winning consistently in the NBA and that method is really paying off this year.

In the beginning of the year I was playing a decent amount of totals but really wasn’t getting anywhere so have been sticking primarily to straight sides the past few months.

I have every play of the season documented here if you want to take a look.

Last year the regular season netted +59 units so we are on pace to match or very likely well exceed the numbers from last year even if this year’s playoffs don’t match lasts (which admittedly will be a good challenge to match that epic run!)

NBA & College Hoops are about to enter the most profitable time of the year so would love to have you on board for the second half of the season so we can keep crushing our bookies!

The NBA All Inclusive Yearly Package includes all of the following: 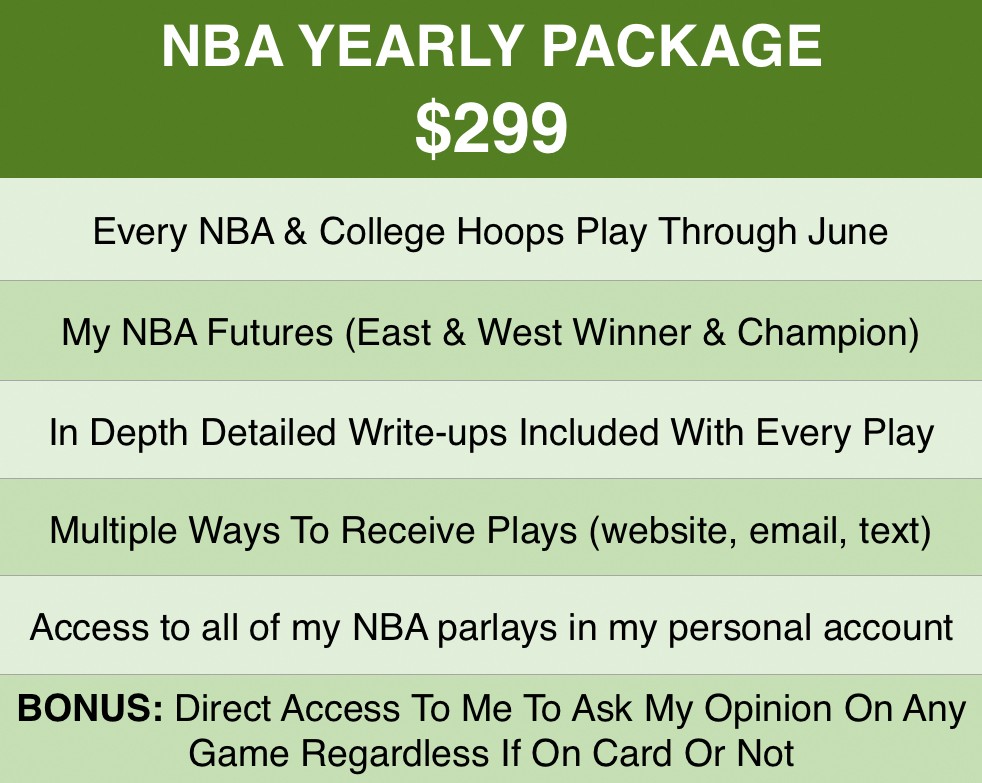