NBA
7:35 PM EST
Rotation #503-504
Raptors -4.5 over Wizards (2u)
Raptors let us down the other night with the win but no cover but this is a team who is going to continue to improve as the new additions continue to get more comfortable in the new system. The Wizards had a huge win last night over the Warriors but that was a very physically and emotionally draining game for them so this is a really tough spot. This is also one of those weird scheduling spots where these two teams play each other back to back on each other’s home courts and when that happens it’s usually a split where the home team wins and covers. The Wiz do have the big edge with Wall and Beal but on short rest against a rested Raptors I like them to win and cover this game. Take the Raptors.

NBA
8:05 PM EST
Rotation #509-510
Celtics -1 over Cavs (3u)
Over 223.5 Points (1u)
This is a huge statement game for the Celtics who are sitting pretty at second place in the East but are getting no respect since no one thinks they can beat the Cavs after losing to them twice already this season. In a series there is no way the Cavs lose but in this game I really love the Celtics to step up and take advantage of the home court and get the huge home win. Look for Isiah Thomas who has been cold since the break to have a monster game and win this one for them at the end. This game should also be very high scoring, hard not to see both teams exceed 110 each so the over is a great play as well. Take the Celtics and the over.

College Hoops
8:35 PM EST
Rotation #41829
Pacers Team Total Over 99 (2u)
For those who have been following along all season you know that I love to play the team totals on road dogs when the team total is 99, a trend I call the “Road Dog 99”. For a team like the Pacers who average 104.5 points on the road, there is no reason this total should be this low especially with how well they have been playing lately. I do like the Pacers chances to also cover the the spread but their defense has been shaky on the road and the Spurs have the ability to bury a team with a bad defense so the safest way to play this one is just taking their team total which should cash by a few buckets. Take the team total over.

College Hoops
9:00 PM EST
Rotation #553-554
Wake Forest +3.5 over Louisville (2u)
This spread seemed to be about 3 points low from what I had it calculated at (-6.5) but that’s for good reason. Wake Forest has been really tough at home with their only losses being against Duke (85-83) and North Carolina (93-87). They have been an especially strong offensive team at home where they average 49 percent from the field and 41.5 percent from beyond the arc. If they shoot to close to their average, it’s going to be very tough for Louisville to keep pace because they just don’t have the offense to consistently perform at a high level on the road. Wake Forest has a lot more to play for as Loiusville is two seed at worst but the Demon Deacons really need a quality win to help their seeding. Second, and most important, they’re playing at home, and you can expect the Carolina crowd to be hyped with hated Louisville coming to town. It’s also senior night so you know these seniors will be ready to go. I think Wake Forest wins this outright but if they don’t it should be a one or two possession game so getting 3.5 should cash the ticket for us. Take Wake Forest.

College Hoops
9:00 PM EST
Rotation #559-560
Michigan State/Illinois Over 136 (2u)
We cashed our last Michigan State total with 7 minutes left in the game last week and we will continue to play their overs until vegas adjusts. This is a team who lost some of their bigs so now have to play with a quicker pace and play small ball which leads to more points and less defense.  Michigan State should play at their pace again tonight against a team who can also put up points in their own right. This total is about 10 points to low and it’s hard not to see both teams scoring in the 70’s or beyond here. Take the Over.

College Hoops
11:00 PM EST
Rotation #571-572
UNLV +4.5 over Utah State (2u)
Saying that UNLV has really struggled of late would be a massive understatement but Utah State hasn’t overwhelmed anyone by burning up the win column either and I really think the wrong team is favored here. UNLV has the best player on the court in Jones and it’s also Senior Night for UNLV as well. The Seniors will no doubt be trying their hardest to end an otherwise very disappointing season on a positive note. I know we played the Senior Night angle the other night and it burned us both times when both teams had big leads and brought in the scrubs who blew the cover. Since UNLV is the dog and not a double digit favorite or close to it, we don’t have to worry about that happening here tonight and I like them to again get the win outright but we’ll happily take the 4.5 points of leeway in case this comes down to foul shots at the end. Take UNLV.

NBA
10:35 PM EST
Rotation #503-504
Clippers -2 over Rockets (2u)
This Rocket’s team is going to continue to play their style win or lose but on night’s when their shooting is off they are going to have a hard time beating anyone with that style. They were up 18 on the Pacers and got cold and ended up losing by 10, so that’s just not a style that translates well on the road especially against a team who plays great team defense like the Clippers. I thought the Clippers would be shaky in Paul’s first few games back and they got back in the rhythm of playing with him, but now that they’ve had a few games to get that chemistry back I look for them to get back to being a dominant home team. The Clips matchup well against the Rockets and they are favored here for a reason. They should win this game by close to double digits tonight. Take the Clippers. 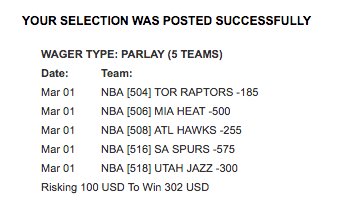 Like I said on Twitter, this card was absolutely loaded. I liked all of these sides independently, but there is no sense is playing more than 3 NBA sides in a night despite how good the card is.

Hawks I like to win and cover as well because we know the rule with the Mavs… fade on the road, back at home.

The Jazz own the East and while they may not cover I definitely like them to bounce back and win this game.

The Spurs definitely shouldn’t lose as a 10 point favorite although I do also see that one being close.