College Hoops
7:00 PM EST
Rotation #721-722
Duke -7 over Florida State (2u)
Duke has struggled their past two games on the road, but being back at home against a team who they are much more talented than will help get them back on the right track. Florida State has been awful on the road this year and almost just lost outright to Clemson last game. FSU is a team who really struggles offensively on the road and this is bad news facing a Duke defense who excels at home. Even if Allen is out, Duke still has plenty of offensive talent to win this game and cover the spread. The Blue Devils shoot nearly 50 percent at home and the crowd will be rocking tonight. Throw on top it’s Senior Night and Duke is coming off two straight losses, this should be a double digit win by the time it’s said and done. Take Duke.

College Hoops
7:00 PM EST
Rotation #725-726
South Carolina -13 over Mississippi State (2u)
This is the best team South Carolina team in over a decade this is an absolutely huge game for this program tonight. It’s Senior Night and this is the last game senior star guard Sindarius Thornwell will ever play in this stadium. For those who haven’t watched South Carolina games this year Thornwell is an absolute beast and should put on a show tonight for the home crowd which is one of the most raucous crowds in the nation. Mississippi State has lost six conference games in a row and they will be looking forward to ending this disappointing season where they lost their best player and haven’t been able to win a game since. Colonial Life Arena provides a huge homecourt advantage and these seniors are going to want to go out with a bang in their last ever home game. The Gamecocks have great role players around Thornwell as well including Duane Notice who is one of the best three point shooters in the nation. Look for Frank Martin’s group to be fired up and ready to go for this one and this should be an easy 15+ point win for the home team here. Take South Carolina.

College Hoops
9:00 PM EST
Rotation #745-746
Vanderbilt +10.5 over Kentucky (2u)
Vanderbilt has really come on to end the season and have quietly won and covered 7 of their past 10. Kentucky has been winning games but covering them has been a different story. The Wildcats are just 2-7 this year in games with double digit spreads. Vandy is a good defensive team and are playing well enough where they can keep this game competitive throughout. Kentucky star guard Fox is dealing with  a knee injury and with him out takes away a key scoring piece and also their best point guard. Vandy needs to win one of its final two to qualify for the Big Dance so we will see their all tonight. Don’t think they win this one but do like it to stay within single digits. Take Vanderbilt.

NBA
7:05 PM EST
Rotation #701-702
Wizards +6.5 over Warriors (2u)
We see it every year when a team is hot and goes into the All-Star break and it kills their momentum and that was exactly the case with the Wiz. They went into the break winning four straight then came out of the break and lost back to back games to 76ers and Jazz. That said, I love the Wizards here. They have been phenomenal at home this season both straight up and ATS. The Warriors just played last night and have been awful this season on back to back road games. The Wizards are rested and will be pumped to get back on track with a win after stumbling out of the break and every team always gets up a little extra to try and knock off the NBA Finals favorite. I do typically have a rule about never fading the Warriors under 7 points because 9 out of 10 times they’ll make you regret that but this spot is too good tonight to pass and I actually think the Wiz win this game outright but we will play it safe against the mighty Warriors and take these generous 6.5 points with the home team. Take the Wizards.

NBA
8:05 PM EST
Rotation #709-710
Thunder +1.5 over Jazz (2u)
The Jazz have been on fire out of the break but this is still a team who struggles on the road. Add to that this is their third consecutive road game which is never an easy spot, I really think the wrong team is favored here. The Jazz are the kings of beating down on the weak Eastern teams (look at who they beat past two games, Bucks & Wiz) but struggle mightily against the West. Believe it or not the Jazz have only covered twice all year against the west (2-16 ATS), so the way to play them is back them vs. the East and fade against West. That said the Jazz are playing great and this probably comes down to the wire but ultimately the Thunder at home on the back of Westbrook pull this one out for the home crowd. Take the Thunder. 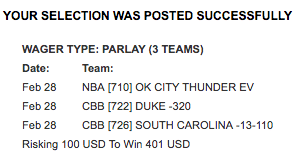